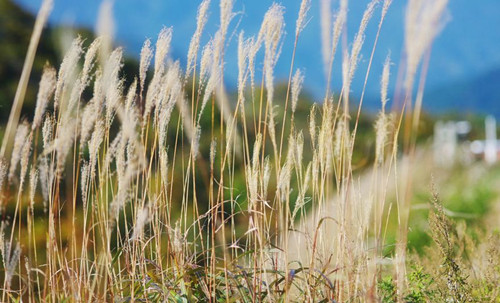 Fossil energy is increasingly scarce, and pollution is becoming more and more serious. The development and utilization of new energy has become a topic of the times faced by countries around the world. In the process of searching for alternative fossil energy and first-generation energy crops, Miscanthus gradually entered the eyes of researchers and became a hope in the second-generation energy plants.

The first generation of energy crops compete with people for food

The first generation of energy crops are mainly grain and cash crops such as corn, rice, sugar cane, soybeans, and rape. Most of these plants are annual, and need to be planted every year on the cultivated land. A large amount of irrigation and fertilization, the input energy is large, but the net energy output is poor. Plus they also compete with grain crops for cultivated land, which brings a series of negative effects. For example, people have cut down forests to supplement cultivated land, which has reduced the earth â€™s carbon storage capacity, which is not conducive to solving the greenhouse effect.

Western countries such as the United States have a large amount of idle land, so they have better conditions for developing the first-generation bioenergy, and have formed a scale. However, for China, which has 1/5 of the world's population, the cultivated land area is less than 1/10 of the world's. The use of cultivated land to produce the first generation of energy plants will inevitably endanger food security and national stability.

Miscanthus has many advantages in one

Miscanthus can grow on barren land without competing with food crops for arable land; they have high photosynthetic efficiency and can convert and store solar energy and carbon dioxide more efficiently; the annual production is large and can provide more biomass for conversion into fuel . At the same time, Miscanthus has the ability to use water efficiently, use fertilizer and photosynthesis. It can be planted a year for a sustainable production of 10 to 20 years. The input is low and the net energy output is quite large. It is precisely because Miscanthus has many advantages, such as not competing with grain for arable land, high yield, strong carbon reduction ability, and large net energy, and has quickly become a new star in the research of energy crops.

Like cereal grain crops, Miscanthus belongs to the angiosperm family Gramineae. There are about 14 wild species in the world, most of which are distributed in Asia. A small amount of them are produced in Africa. They belong to carbon four plants. They have physiological characteristics of high light saturation point, high photosynthetic rate and high photosynthetic production efficiency, and consume less water and photosynthesis than carbon three plants. efficient.

Giant Miscanthus, the most studied in the world, is a sterile triploid hybrid that originated in Japan. Its parents were originally diploid Miscanthus and tetraploid Midi native to East Asia (including China). Giant Miscanthus was introduced to Denmark as an ornamental plant in 1935. Half a century later, it was first recognized and tested as a potential alternative to energy crops in Europe.

According to Sang Tao, director of the Key Laboratory of Resource Plant R & D of the Institute of Botany, the Chinese Academy of Sciences, the United States has established four biomass energy research centers since 2007 to mobilize almost all relevant national laboratories in the United States and dozens of research universities to collaborate on the second generation. Research on energy crops. In the second-generation energy plant development plan in the United States, switchgrass, miscanthus, willow, and poplar have all become the objects of key research.

Stephen Long, the national energy consultant of the United States, is one of the more in-depth scientists on Miscanthus. Recently, their results showed that the dry biomass yield of Miscanthus chinensis reached an average of 30 tons per hectare with little fertilization. If the Miscanthus cultivars are further improved so that they can be planted in a wider area and increase their yield, theoretically, 6.2% of the cultivated land area in the United States can produce 133 billion liters of ethanol, which can replace 20% of the US gasoline use in 2008. Reduce the amount of carbon dioxide emitted by the United States by using oil in that year by 30%.

American scholar Somerville promoted the US bioenergy strategy to the "Manhattan Project" in the new century. When the United States responded to the financial crisis, it launched an energy revolution. There is a view that the energy revolution led by Obama is based on a green economy to promote a new economic revolution. This revolution has far exceeded the simple economic revitalization plan and is widely known as "opening a green revolution."

British giant Miscanthus fuel test is ahead of other European countries. According to Reuters, the cultivation of British giant Miscanthus has expanded dramatically. In the past five years, the harvest has increased by more than ten times, which will help the United Kingdom meet the EU â€™s renewable energy goals faster and better. Last year, the United Kingdom launched the giant miscanthus energy plan. The Drax Power Station, the largest thermal power station in the UK, has started to mix coal and miscanthus to generate electricity. The rise in British food prices at the beginning of this year also failed to change this British plan.

We export in beauty and salon equipment has more than ten years of experience. We are a leading manufacturer, we export to abroad as follow: